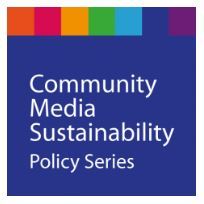 The recently launched UNESCO Community Media Sustainability Policy Series has been created to assist media regulators and government institutions to provide a regulatory environment that recognises the value of community media and supports its long-term sustainability. Read more about it at the EPRA web site: https://www.epra.org/news/regulation-news/news_items/community-media-sustainability-unesco-s-policy-series-targeting-broadcasting-regulators

Community media is an issue which has been on EPRA’s agenda on several occasions. A noteworthy document of the network is the comparative report on Local and Community Media released following a Working Group held in 2013. Most recently, Michael Nicolai, President of AMARC Europe, spoke at the EPRA meeting in Edinburgh in May 2017 and Judith Purkarthofer, President of CMFE, will participate in a workshop at the EPRA meeting in Vienna in October 2017.

CMFE depends on members' contributions and donations to pursue its goals. Support CMFE by donating/paying via Paypal

CMFE was one of the main Partner for MEDIANE, the Council of Europe’sMedia Exchanges for Diversity Inclusiveness, Antiracism and Nondiscrimination in Europe. More Infos: http://cmfe.eu/mediane

CMFE is one of the 29 members of the EU Civil Society Platform on Multilingualism (CSPM).
> Visit the Poliglotti4.eu website

MARS - Media Against Racism in Sport

CMFE was one of the main Partner for MARS, the Council of Europe’s Media Network against Racism, for Mutual Understanding and Intercultural Dialogue. More Infos: http://cmfe.eu/mars